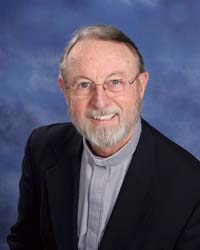 A graduate of Saint Thomas, Catholic Central, and Aquinas College, Dennis (“Denny”) has been a deacon and parishioner at Saint Thomas for over 50 years. He has been married to Suzanne Haas Williams since 1984, has four children and four grandchildren. Denny retired from the Williams Group, Inc., in 2002 after founding it in 1978. There he served as creative director, writer, and account executive. His community service includes the Peace Corps (Guatemala, 1965-1967), the Grand Rapids Urban League (1980-1984), Heart of West Michigan United Way (1988-1992), and the Dominican Center at Marywood (1998-2004). He has served as the executive director for Epilogos Charities and held various volunteer positions for the Diocese of Grand Rapids. Denny has served on the board of directors for the Inner City Christian Federation and on the board of trustees of Aquinas College.