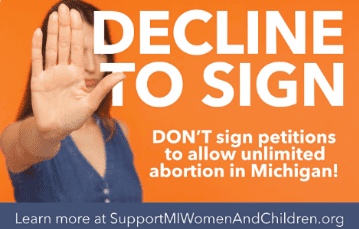 Decline to sign petitions that would allow unlimited abortion in Michigan

Learn more below about the “Reproductive Freedom for All” statewide petition drive to amend the Michigan constitution to allow abortion at any time during pregnancy.

Catholic residents of Michigan may encounter in public locations petition gatherers asking for your signature on a form that begins “Constitutional Amendment to: establish new individual right to reproductive freedom…”

Michigan’s bishops are encouraging Catholics not to sign this petition. Here’s why:

Organizations in Michigan, including Planned Parenthood and the American Civil Liberties Union (ACLU), have formed a ballot committee to raise funds and organizational support to pass this pro-abortion constitutional amendment. The Reproductive Freedom for All constitutional amendment is not about reproductive freedom, which already exists. Planned Parenthood and the ACLU’s amendment would radically distort Michigan’s Constitution to create a new unlimited right to abortion, which would spill over and affect many other issues. If passed, the amendment would go into effect whether or not the U.S. Supreme Court soon allows states to decide their own abortion policy.

To place a question on the November statewide ballot the proponents of this abortion amendment must collect 425,059 valid signatures from Michigan voters and submit those signatures to the State by July 11, 2022.

To learn more about this, see the Diocese of Grand Rapids website.